Zed attacks Mase to prevent him from following and protecting Su-Jin Ji as his accomplice waits to capture the key to the Pandora's Box.

Atran launches an attack on Hon. Mase is leading Su-Jin Ji down a hallway when suddenly, Atran agents appear before them and open fire at her. Mase creates a flame shield to protect her and punches at the floor to send an attack from below to the enemies. He then throws a fireball to the surviving opponents. Suddenly, Zed appears and demands the key to the Pandora's Box - Su-Jin Ji. Mase asks the young lady to leave and proceed to the evacuation chamber - an underground bunker. The head of Hon agrees and she goes away, guarded by two Hon agents. Zed reveals that he isn't the only highly dangerous another sent to obtain the key. Mase tries to follow the princess but Zed obstructs his way and starts to attack.

Mase skids backward as he blocks Zed's initial attack. Zed expresses his irritation on Mase's lack of concentration on their battle while they continue to block and exchange attacks. One of Zed's punches comes through and sends Mase crashing through a wall. He tells Mase to fight better so he can save the princess sooner. Mase realizes the truth on his words and starts to take the fight seriously. He creates a huge fireball which he directs at Zed, who barely manages to avoid it. He follows it with a punch which Zed block with his arms. Zed now expresses his contentment as he continues their fight.

Zed calls it off and Mase dashes towards the hallway after both become exhausted from their battle. Zed realizes that he would have died if the fight carried on and wonders how come Mase's name was noted as the least dangerous in list. 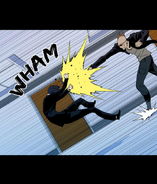